Cape Breton’s latest adventure offers sweeping views of the ocean and the Cabot TrailStory by Jennifer BainSpecial to The Globe and MailPublished March 10, 2022

Take in the views of Cape Breton and the Atlantic Ocean in comfort, from Cape Smokey’s gondola, the first of its kind on the East Coast. Cape Smokey, with its 306-metre vertical drop, is the biggest mountain in mainland Atlantic Canada.
Jennifer Bain

Snowshoes tucked under my arm, I climb into the Atlantic Gondola on a blustery Cape Breton day and breathe in that new gondola smell as we ascend Cape Smokey. I’ve got a royal blue cabin for eight all to myself and so for the next six minutes I scoot from seat to seat, studying the mountain from all angles and looking down through the flurries for glimpses of the Atlantic Ocean and Cabot Trail.

There are ambitious plans to turn this sleepy ski hill near Ingonish Beach into a year-round “green Disneyland,” and I can only imagine how vivid this view will be when the fall colours explode. But on this winter weekday, the colours are muted shades of white and grey, the vibe is mellow and everyone is busy making the most of fresh powder from a recent blizzard.

Welcome to Atlantic Canada’s first gondola, which is barely six months old but an exciting harbinger of change.

My ride ends too soon, and I catch the eye of someone in the upper gondola station to ask where the snowshoe trail is. A man points to a small sign on a spike for the Snowshoe Trailhead that promises a 1.6-kilometre, two-hour round trip to Skier Lodge Lake. The gregarious fellow who fitted me for snowshoes and poles already told me the isolated lake is so quiet that it’s eerie, not to be tempted to snowshoe around the lake because that trail extension isn’t ready yet, and to double back on the same trail I go out on.

Before I start my solo snowshoe trek, I know there’s another sign around here that I must see. It’s nailed to a birch tree behind a trio of snow-covered Adirondack chairs.

“Do not wonder off trail,” it says.

Locals think it’s a charming typo – wonder instead of wander – and a mistranslation by the Czech businessmen who are transforming Ski Cape Smokey into Destination Cape Smokey. But I’ve talked to Martin Kejval, chief executive officer (and a renowned skier), and know he has another explanation.

“It’s a play on the phrase `it’s so wonderful,’” he explains, “because I always say `it’s so wonderful’ when describing Cape Breton.” The views here, he enthuses, are like a painting. “Cape Breton is a spectacular place,” he repeats throughout our conversation. “It’s as if Hawaii and New Zealand had a child.”

Cape Breton is a wonderful place, a Nova Scotia island that’s famously home to one of Canada’s greatest seaside and mountain drives along the winding 298-kilometre Cabot Trail loop.

Ski Cape Smokey was built here in Ingonish Beach – one of the Cabot Trail communities – just south of Cape Breton Highlands National Park and Cape Breton Highland Links golf course in the 1970s. The first lodge burned down and was rebuilt, but the hill has struggled ever since. The province has subsidized aspects off and on, valiant community volunteers ran things for ski season, and apparently eight sets of people came heartbreakingly close to buying the whole operation.

Then along came New York property developer Joseph “Uncle Eagle” Balaz, who famously built a nearby luxury home called Red Head Cliffs that he rents out. He gathered investors and bought the hill from the province in 2019. With a 305-metre vertical drop, Cape Smokey is the biggest mountain in mainland Atlantic Canada. Only the Marble Mountain ski resort in Steady Brook, Nfld., is higher.

Cape Smokey Holding has ambitious plans to draw Canadian and American visitors here year-round, not just in the lobster-fuelled summer or to marvel at the fall colours. They’re working on a multistorey “treewalk” made of natural wood with observation decks and a walkway at the top of the hill beyond the gondola, a craft brewery with Czech-style offerings, restaurants and eventually a new lodge. But first it secured snow-making machines and then quietly launched its gondola on August 26 for staff, and then September 4 for a grand opening.

The lure of gondolas is that, unlike chairlifts, you don’t need to be coordinated to get on and off them. Doors open and close slowly, and automatically, so there’s no chance of anyone falling out during the ride. The cabins cocoon you from the elements, making for more pleasurable and hopefully longer ski days. Gondolas offer a “completely effortless experience,” as Kejval puts it, and attract people who want to experience heights but are also afraid of them and don’t necessarily ski or snowboard.

“We are Atlantic Canada’s first and only gondola,” says Cape Smokey’s chief marketing officer Anna Solomon. “The Cabot Trail is beautiful, but if you want to see those views you have to hike. This allows all accessibility levels to come and enjoy these views.”

“ Cape Breton is a spectacular place. It’s as if Hawaii and New Zealand had a child.” 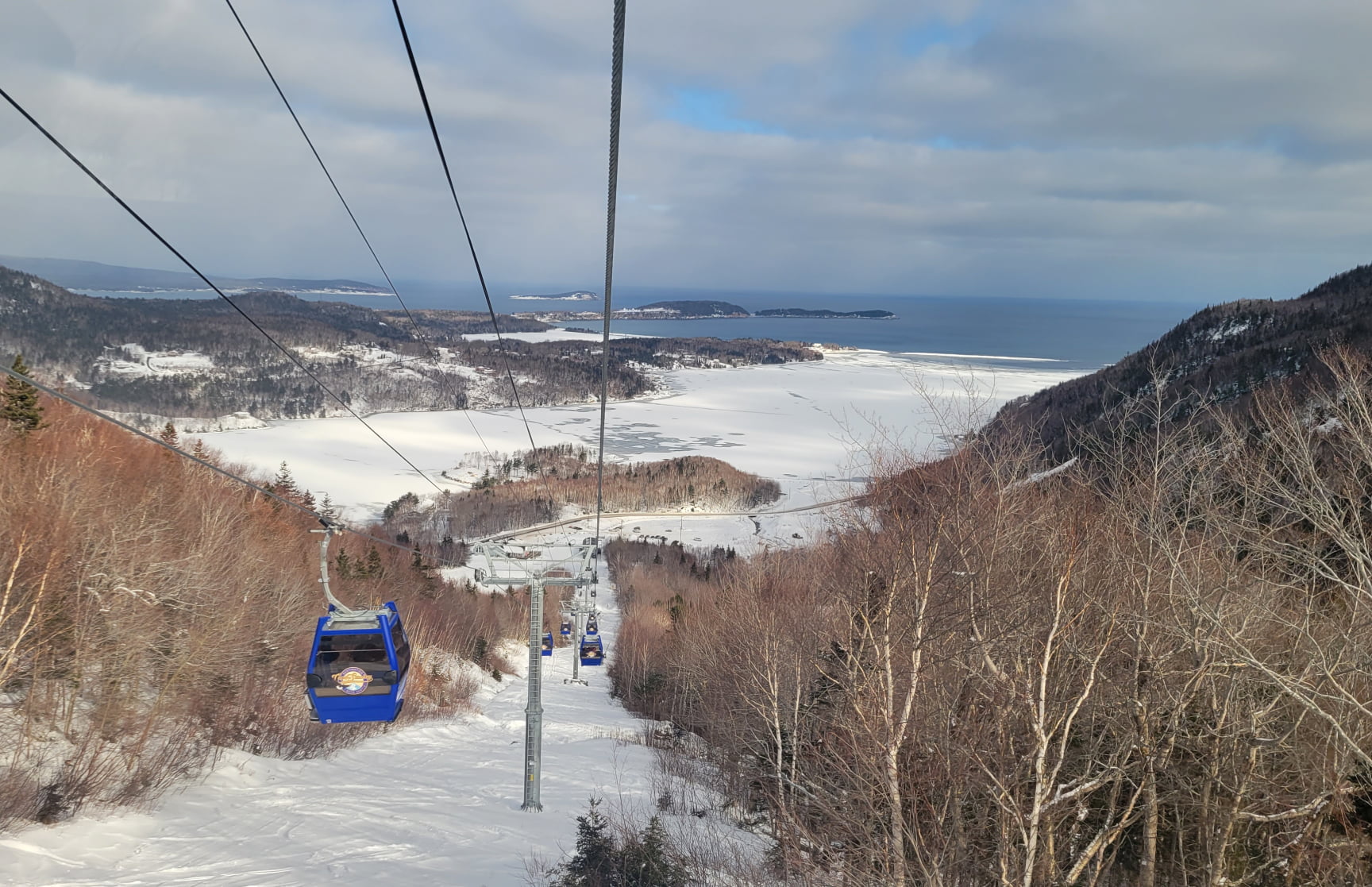 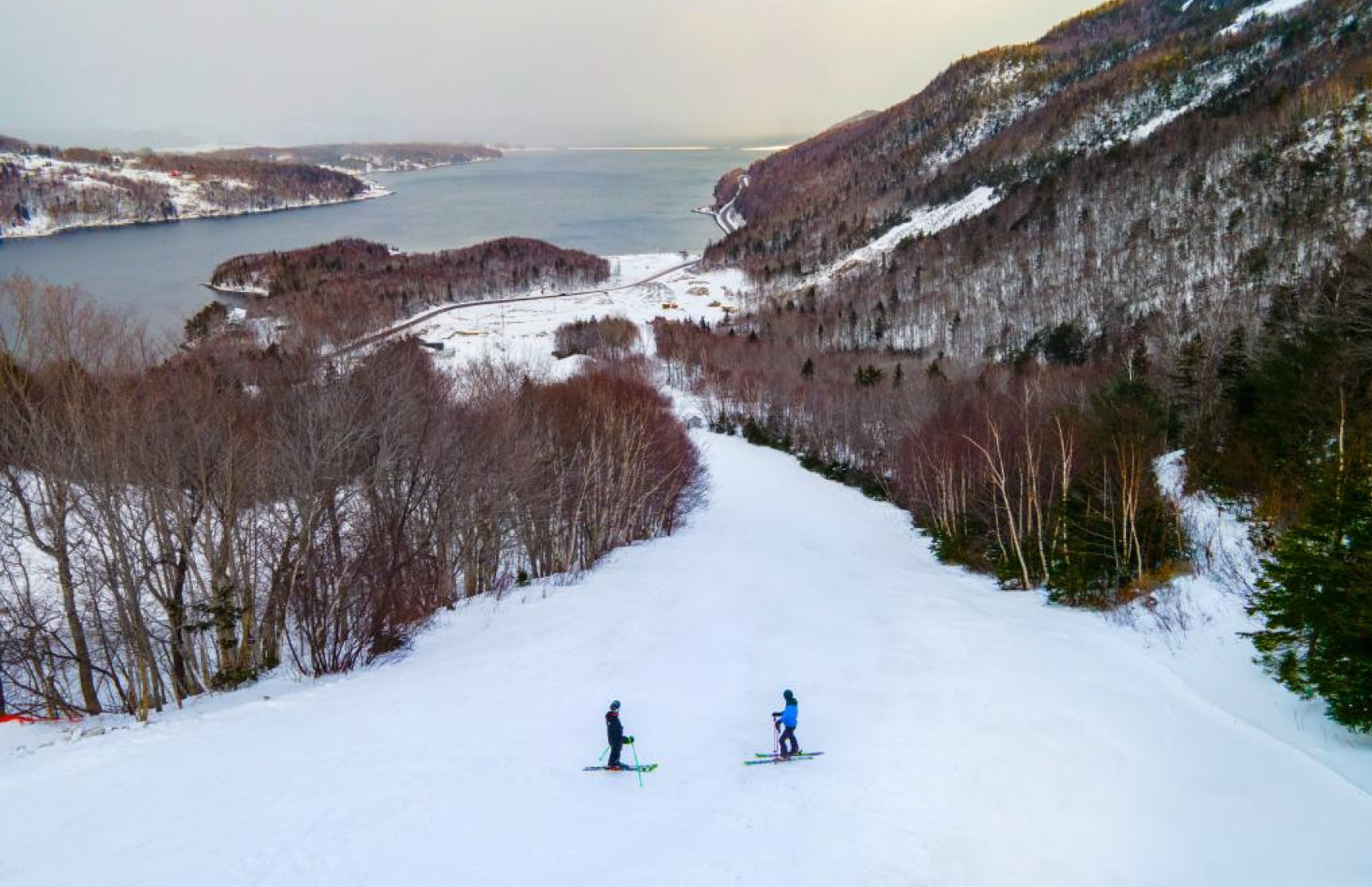 Ella Barron can vouch for that. She was 97 in September when she took one of the first gondola rides with her family. “It was really beautiful,” recalls the Dutch war bride who settled here in 1946 and sent her kids to Cape Smokey to learn to ski. “They have a lookout there and you can see all over Ingonish. You have to try it yourself sometime.”

Even before I do try it for myself, I know the snazzy gondola is made by Leitner-Poma of America, fully enclosed and can hold eight passengers (but is restricted to “bubbles” during the pandemic). There are 27 gondola cabins for now, but room to expand to 50. In summer, a one-way ride will clock in around eight minutes, but in winter it’s a shade faster at just under six minutes. The decision was made to keep things simple with the name Atlantic Gondola.

My snowshoe to Skier Lodge Lake is eerily quiet, as advertised, in a blissfully serene way, until I cross paths with a couple who set out just ahead of me. We chat for a couple of minutes and then I linger at the lake to put some distance between us. Mindful of moose and the fact that the gondola shuts down at 4:30 p.m., I snowshoe back at a steady clip. I hear the gentle whirl of the gondola before I spot the edge of it through the trees.

For a moment, I wish I could swap my gear and ski down one of the 11 runs to the base, but I’m here to experience the gondola. As I ride back down the hill, drinking in the views, I know the detachable cabins are tucked away in a warehouse each night. They must be reloaded onto the aerial lift’s cables when winds are under 40 kilometres an hour, but once on they can handle winds of up to 80 kilometres an hour. “The gondola is a trooper and can handle all weather conditions,” Solomon promises.

I’m an old hand at gondolas, so enjoy a little rocking and swaying. I head into the lodge that’s still emblazoned with the name Ski Cape Smokey and return the snowshoes that came as a package deal with my gondola ticket. People are gathering at rustic picnic-style tables watching the Olympics, eating burgers and poutine, and drinking Cape Smokey Bohemian Pilsner, made in Halifax for now until it can one day be brewed on site.

I keep thinking about the Kejval, his love of the word “wonder,” and when he told me “we want to have as many experiences as we can and turn this into a green Disneyland, where we can show people the outdoors and nature.”

Down by the ocean, there are plans for what Solomon calls a “mini-Whistler, but on the water” at a leased marina. There’s a partnership with Breton Air for helicopter flightseeing trips – though strong winds have scuttled this week’s flights. By summer, there will be water offerings with kayaks and paddleboards, and maybe even scuba opportunities.

On 450 acres of Cape Smokey, the trail I just snowshoed will soon circle the lake. The attention-getting treewalk is coming, along with downhill mountain bike, hiking and snowmobiling trails. The new gondola may just seem like a comfortable new way to get from the bottom of the hill to the top, but it’s the anchor to everything that’s about to unfold here.