As housing prices soar in big cities, the country’s eastern provinces are experiencing a surge in migration. Newcomers are being welcomed, but some locals are wary.

Houses along the coastline in Bonavista, Newfoundland. Young professionals from across Canada are pouring in to the region.

The collapse of the cod industry had pushed about 1,000 residents to seek their fortunes in places like Texas, New York and oil-rich Alberta, about 4,000 miles away.

These days, however, so many migrants are arriving from across Canada — mostly young professionals from big cities like Toronto — that some local developers have a three-year waiting list for home buyers.

Sam Yuen, 40, a communications manager for a bank, who recently moved to Bonavista from Toronto with his partner, Derek McCallum, an architect, snapped up a three-bedroom, early-20th-century home for about $30,000. “We love the nature and the sense of belonging here,” Mr. Yuen said.

Until recently, Canada’s Atlantic provinces were suffering from so much outward migration that some towns started offering free land to lure workers. But as urban life across the world has been upended by the coronavirus, with lockdowns, shuttered bars and socially distanced gyms, the picturesque region is experiencing the largest inward migration in nearly 50 years.

Desperate to escape pandemic doldrums and soaring housing prices, and energized by a global shift to remote working, the newcomers are flocking to Atlantic Canada, where they have been largely welcomed. But in the distinctive coastal region — shaped by the traditional values of its Indigenous peoples and Irish, Scottish, English and French settlers — the migration of moneyed urbanites is also fanning some tensions.

Though housing prices remain low compared with bigger urban centers, in Bonavista, population 3,752, they are exploding, and some local residents bemoan the higher property taxes that come with them.

Sign up for the Canada Letter Newsletter  Back stories and analysis from our Canadian correspondents, plus a handpicked selection of our recent Canada-related coverage. Get it sent to your inbox.

The social fabric of the town has also been changing. Traditional craft shops and restaurants offering fish and brewis, a starchy local dish of cod and bread, have been gradually giving way to designer sea salt companies and to purveyors of cumin kombucha and iceberg-infused soap.

Bonavista, influenced historically by its churches, now hosts a growing L.G.B.T.Q. community, including a bisexual mayor and a lesbian police chief, stoking some resentment among a minority about the town’s tilt toward social liberalism.

The mayor, John Norman, 36, was born in the town. A modernizer with a taste for haute couture, he is called the “Baron of Bonavista.” Mr. Norman, who was recently re-elected, has been known to preside over town meetings in an Alexander McQueen jacket adorned with black feathers.

To help accommodate the newcomers, Mr. Norman, a real estate developer, is spearheading the restoration of nearly 100 homes.

“The pandemic is helping to revive the town,” said Mr. Norman, who lives with his partner, Guillaume Lallier, in a 120-year-old house filled with masterpieces of Canadian art.

Rob Greenwood, a regional development expert at Memorial University in St. John’s, Newfoundland’s capital, said the arrival of “come from awayers,” as they are known in Newfoundland, was a boon to Canada’s easternmost province. Its remoteness had historically undermined its ability to attract outside talent and investment.

“The come from awayers are arriving with knowledge and networks and money,” Mr. Greenwood said.

Called “the rock” because of its rugged coastlines, the island of Newfoundland was variously a British colony and an independent country before it joined the Canadian confederation in 1949. It has long prided itself on its singular culture, including a distinct vernacular and barroom customs, like kissing a cod to become an honorary Newfoundlander.

Newfoundlanders’ plucky hospitality was popularized in the Broadway musical “Come From Away,” which portrays the true story of how a small town mobilized to welcome 6,700 travelers after 38 planes were diverted there after the Sept. 11, 2001, attacks.

Bonavista, graced with a scenic harbor and a lighthouse sitting on a noirish stretch of rocky cliffs, is about a three-and-a-half hour drive from St. John’s.

“Some have referred to Bonavista as the real Schitt’s Creek,” mused Mr. Norman, referring to the name of the fictional town in the wildly popular, Emmy-award winning Canadian series “Schitt’s Creek.” The show features a rich couple and their bisexual son and socialite daughter who have fallen on hard times and find an unexpected sense of community in a tiny rural town. 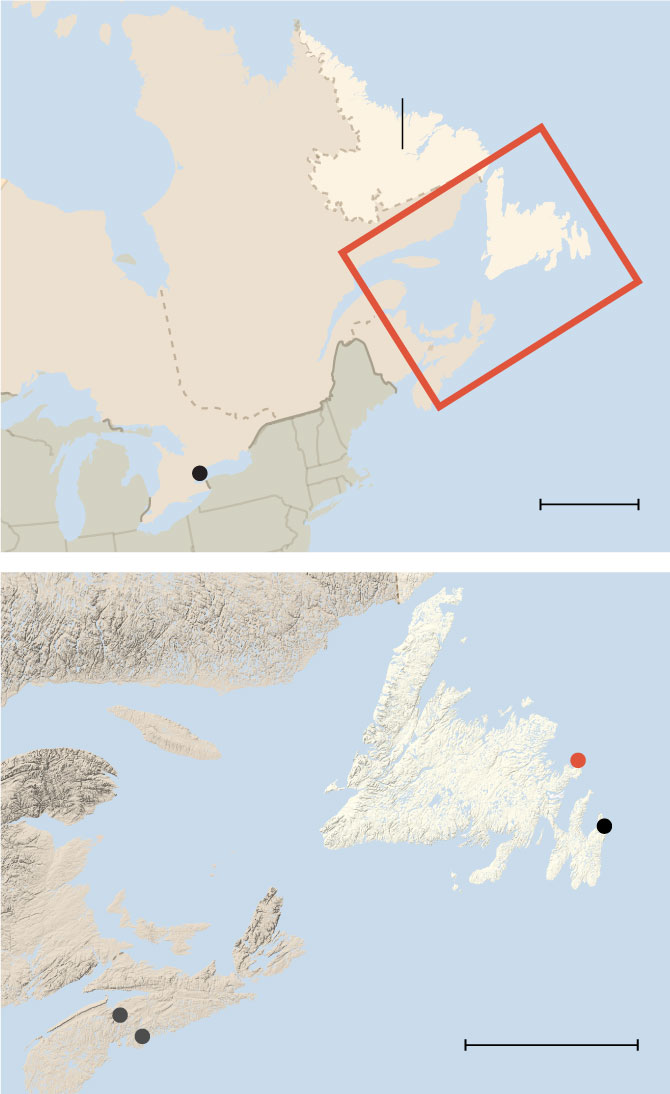 By The New York Times

For pandemic pilgrims leaving behind frenetic urban lives, there can be some culture shock.

Mr. Yuen observed that he was one of a handful of Asian Canadians in Bonavista, and he missed dim sum outings in Toronto. But Bonavista has been able to achieve something few urban centers have: zero cases of Covid-19 and no lockdowns, in line with low infection rates across the region. Neighbors also stop by with offerings of moose meat, while his backyard is an expansive ocean.

The couple are currently shuttling between Bonavista and Toronto, and plan to eventually move permanently to Bonavista. “The pandemic has lessened the fear of missing out on things back home,” Mr. Yuen said.

There have been other unexpected surprises. In August, a Pentecostal preacher in Bonavista held an outdoor service during which he blasted a sermon on loudspeakers railing against abortion and same-sex marriage.

The sermon, captured on video, prompted a backlash and complaints. Town officials, in turn, asked the church to lower the volume. The church did not respond to requests for comment.

Some residents also complained on social media after officials installed three rainbow-colored benches in the town to show support for the L.G.B.T.Q. community.

Mr. Yuen stressed that in Bonavista, he and his partner had felt warmly welcomed, but said that the sermon had unnerved them. “In Toronto,” he said, “we lived in a liberal bubble.”

Carrie Freestone, an economist at Royal Bank of Canada, who wrote a recent report on the migration phenomenon, said it began about five years ago and had been “supercharged” by the pandemic.

According to Statistics Canada, about 33,000 people from other provinces migrated to the region of 2.5 million people in the first half of this year alone, compared with about 18,500 in the same period in 2005.

Many of the new arrivals are millennials, Ms. Freestone said, motivated by the new “You only live once” economy. Some were filling important labor gaps in Nova Scotia, Prince Edward Island, New Brunswick and Newfoundland, including in the technology and health care sectors.

Reg Butler, a crab fisherman, whose family has been in Bonavista for five generations, credited the newcomers for rejuvenating the local economy after the town emptied in the 1990s following a moratorium on cod fishing. But he said a housing shortage was stoking some resentment.

“Locals are finding it hard to find affordable housing, and some are concerned,” he said. “The come from awayers also have to adapt to our way of life.”

According to Mr. Norman, the cost of a house in Bonavista had increased, on average, by 70 percent in the past five years to $180,000. There is so much demand for housing, the town recently asked Habitat for Humanity to help build more affordable homes.

The search for rural idylls is also affecting other Atlantic provinces.

Stefan Palios, a business consultant, and his partner, Marty Butler, a registered nurse, both 29, recently traded in their cramped one-bedroom Toronto apartment for an imposing seven-bedroom Victorian house in the tight-knit town of Windsor, Nova Scotia, which they bought this past year for about $280,000.

This year, at least 20 come from awayers have settled and invested in Windsor, a former shipbuilding town of about 5,000 that claims to be the birthplace of ice hockey. A Vancouver transplant opened a sign language interpretation business. A data analyst from Montreal is analyzing sports team performances. And Mr. Butler got a job as an organ transplant nurse in nearby Halifax, Nova Scotia’s capital.

But the couple were also inundated with hundreds of angry messages when they began posting about their home renovation on TikTok. Some Nova Scotians accused them of making housing unaffordable and told them to go home. “You’re what every single Nova Scotian hates right now,” wrote one.

Mr. Palios is philosophical about the blowback. “People have their way of life,” he said, “and they don’t want you to come and destroy it.”

Dan Bilefsky is a Canada correspondent for The New York Times, based in Montreal. He was previously based in London, Paris, Prague and New York. He is author of the book “The Last Job,” about a gang of aging English thieves called “The Bad Grandpas.” @DanBilefsky