Little Louis’ does not look like a restaurant that is about to seduce my tastebuds. Set into a cluster of retail units on the west side of the small New Brunswick city of Moncton, it resembles, at first glance, more a place where I might take my dry cleaning rather than eat well.
But I have been advised to try it – and the suggestion proves well founded. The blue pearl oysters are local heroes newly plucked from the ocean; the scallops in green curry are just as fresh. Both are recommended by a waitress whose accent flits between Anglo-Saxon and Gallic; the Canadian compromise. When I set down my dessert spoon, I am happy and full. And I wonder, not for the last time, what John Steinbeck would have made of it.
It is not as odd a thought as it sounds. In the autumn of 1960, America’s great chronicler of the Depression era embarked on a meandering road trip around his own country. The resultant book, Travels With Charley (Charley being his poodle), found him relishing (for the most part) an odyssey of back-roads, unheralded towns, little eateries and random conversational encounters. And it still felt gloriously alive on the page an exact half-century on, when I tracked the route of its early chapters along the shore of New England. 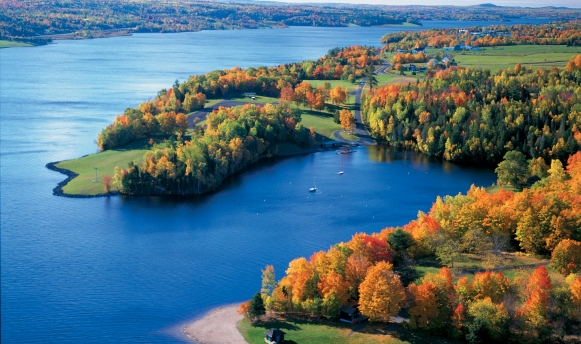 New Brunswick is one of the four provinces which make up Canada’s Atlantic shoulder Credit: Getty

It was not difficult to pick up the trail. Steinbeck documented his movements diligently – through Rhode Island, Massachusetts, Vermont and New Hampshire; then, with growing affection for his subject, along the rocky flank of the region’s biggest state. “I moved up the coast of Maine,” he remembered, “through Millbridge and Addison and Machias and Perry and South Robbinston, until there was no more coast. I never knew or had forgotten how much of Maine sticks like a thumb into Canada – with New Brunswick on the east.”
Of course, his talk of “no more coast” referred only to the USA. Committed to roll in his tyre prints, I felt a tinge of regret as I turned left for the upper reaches of Maine – rather than right across the border. The latter would not only have let me visit New Brunswick – one of the four provinces which make up Canada’s Atlantic shoulder – but continue my tracing of the continent’s jagged edge along the Bay of Fundy, the corridor of famously epic tides and climactic moodswings, which separates New Brunswick from Nova Scotia.
So Moncton, on a September morning, feels like unfinished business. Not least because it is a logical start-point for a journey in search of the bay – a functional red-brick hub short on flourishes but poised on the Petitcodiac River where it flows south to the sea. I follow it, drifting out of the city and into the sort of small-town realm that Steinbeck eulogised in Travels With Charley – Stoney Creek, and its white clapboard churches; Hillsborough, where the ghosts of the branch line which once connected it to the wider world rust in retirement at the New Brunswick Railway Museum – dead rails superseded by Route 114.

The East Quoddy Lighthouse on Campobello Island Credit: istock
I am also seeking a vision that is scarcely a secret, yet is also “hidden”. The New England “Fall” is America’s great seasonal showpiece; a rustic rainbow which caught Steinbeck’s eye in 1960. “The trees burst into color, the reds and yellows you can’t believe,” he mused. “It isn’t only color but a glowing, as though the leaves gobbled the light of the sun and then released it slowly.” The New Brunswick autumn, by contrast, receives fewer plaudits, global perception halting at the border – even though the landmass continues, and the orange-pink arboreal dance towards winter with it. The happy result is a calmer take on it all – the roads far less thronged by leaf-peepers than the lanes of the Berkshires.
I am not disappointed when I reach the Bay of Fundy to find autumn draped around Hopewell Rocks. That paintbox mixture of failing, mortal gold and undying evergreen adds a sublime backdrop to the dislocated boulders that, eroded by the sea’s unforgiving touch, declare this coastline to be a living entity. Such was demonstrated in 2016 when Elephant Rock, a sedimentary outcrop whose discernible “trunk” made it one of the site’s most photographed elements, collapsed under its own weight. However, there is enough geological majesty remaining to keep visitors enthralled – Lovers Arch, two half-fallen slabs which lean on each other for support, seeming to kiss. The waterline continues the argument that the ground here moves and murmurs. When I arrive, the bay is gnawing the base of the arch, kayakers paddling past. By the time I depart, the dry bedrock is exposed.
To drive west is to experience the bay’s fluctuations in temper. A sudden downpour assails me as I inspect Sawmill Creek Covered Bridge, the beams of this 1905 structure proving they can still protect a traveller. And the sky knee-jerks from murderous gloom to benign blue as I loiter on the ragged bluff of Cape Enrage. Since 1840, a lighthouse has stood here, warning sailors of the hostile currents below. The restaurant alongside is a more recent concept, slotted into what was the keeper’s house until the role was abolished in 1988. Within, chef Slawek Dobrzynski brings his native Warsaw to New Brunswick, cooking up Polish garlic sausages – alongside a decidedly more Canadian lobster poutine.

Hopewell Rocks at low tide along the Bay of Fundy Credit: istock
If this seems incongruous as I gaze at Nova Scotia, brooding across the bay, it is also part of the area’s welcoming vibe. Down the road, Alma is small-town Canada at its prettiest – laughter echoing within the Holy Whale Brewing Company, another clapboard church, repurposed as a craft alehouse; family firm Kelly’s Bake Shop selling cinnamon-heavy sticky buns whose aroma billows into the street. Across the road at Cleveland Place, a friendly B&B, Jane Chrysostom makes me a breakfast of eggs and toast, and salutes the joys of home. “My husband and I once moved to New Jersey for work,” she explains. “But like many New Brunswickers, we came back again – the homing instinct is strong.”
A former timber town turned to fishing and conservation, Alma sits at the south-east corner of Fundy National Park, a tranche of protected forest which confronts me with a truth – that neither Steinbeck nor I would have been able to continue to drive all the way along this coastline. The shore is too fierce, overloaded with cliffs and chasms. Highway 114 concedes the point, cutting north-west through the national park – where autumn also seems to be struggling, making scant impact on the green stubbornness of the massed firs.

Fundy National Park Credit: Getty
It is not until I regain the bay at St Martins that the season reasserts itself, setting fire to the leaves along the Fundy Trail Parkway. Here is a private road, hewn for tourism, which tries to tackle this formidable seafront, inching carefully back east amid crevices and crags. It does so not to ruin the vista, but to celebrate it – curling around Hearst Lookout, where the land plunges precipitously, and tip-toeing across the Great Salmon River. At an adjacent visitor centre, grainy photos show the waterway in 1929, scows propped on the bank, freighted with lumber. There is no such commotion now, just ripples on the surface, and signs for Long Beach – where advice that “swimming is not permitted in this area” states the obvious, the bay churning and writhing beyond the shingle. I go east as far as I can, to a road-block and a board showing that the Parkway will be extended all the way to Alma by 2021. But inland – not by the sea. The cliffs have won their war with the diggers.
I have no choice but to turn, and head west. Saint John is an interruption, a port-city of flyovers and ships – though one which hails the province’s marine life. At the Museum of New Brunswick, the skeleton of a Northern Right Whale – washed ashore in 1992 – fills out the second floor, its bones extravagant curves, its jaw a vast masterpiece of evolution.

Show more
Sixty miles further west, Saint Andrews provides chances to admire breathing, breaching examples. It is a resort town of splendid neatness – holiday homes aligned in comely rows; a campground by the beach; the gilded Algonquin Resort preening on its hilltop, as it has done since 1889. Four blocks beyond, King Street slopes down to the jetty – where pleasure boats push out into Passamaquoddy Bay, on a search for migrating ocean giants.

St John Credit: istock
By now, Nova Scotia has been lost to the horizon; replaced, visibly, by Maine – the Perry and Robbinston of Steinbeck’s recollections almost tangible to the west. New Brunswick, too, displays its fractured soul – Pendleton, Mcmaster and Deer Islands thrusting flinty elbows into the depths. However, the captain of the catamaran Quoddy Link has a further-flung destination in mind – the Wolves, a roughshod archipelago where humpbacks are known to gather. So it proves, a pair of them – Sedge and Chevron – leaping and arcing above the silver swells. If there is a sadness to the fact that these creatures can be named and identified so easily, so few are their numbers, there is also a beauty to the scene that is underlined by every soar and splash. On the left, meanwhile, autumn charms the sparse vegetation on South Wolf Island, glowing gently even here – knowing its moment is now.
Essentials
Getting there
Air Canada (00800 6699 2222; aircanada.com) offers connections to Moncton and Saint John from Toronto and Halifax (Nova Scotia). Direct flights to both hubs from Heathrow.
Where to stay
The Delta Beausejour in Moncton (marriott.com) offers doubles from C$131 (£77), room only. Cleveland Place in Alma (cleveland-place.com) has double rooms for C$150 (£88) per night, including breakfast. The Algonquin Resort in St Andrews (algonquinresort.com) offers double rooms from C$183 (£108) – accommodation only.