NEWFOUNDLAND: The Most Irish Island in the World

The most Irish island in the world 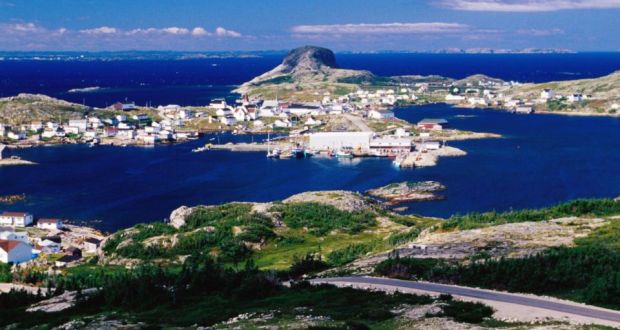 Newfoundland is not Canada, as the people there never tire of telling you. “Canada”, in this context, is not just a euphemism for “boring”, “law-abiding” or “flat”, the island only voted to join the confederation of provinces in 1948, and that vote was split 51 to 49 per cent – a cause of some abiding bitterness among the baymen, the former fishermen who live along these rocky shores.

Greg Malone, who wrote Don’t Tell the Newfoundlanders: The True Story of Canada’s Confederation with Canada, says people have brought the book into cemeteries to read aloud over their parents’ graves, to tell them they were right all along.

Newfoundland was tactically vital to the allies, and its fate a matter of international agreement, so never mind the vote, Malone argues the island’s independence was effectively “sold” to Canada in return for the cancellation of Britain’s debt after the second World War.

Others do not remember the pre-confederation days with great warmth, however, recalling a time when the fishermen of the bays were hopelessly indentured to merchants in the capital, St John’s. Debt, payment and colonial plunder are recurring themes.

The first financial crisis was in 1933, when the island had to dissolve its parliament in return for a bailout from Britain. Some of these debts were incurred during the first World War, when Newfoundland, a dominion of the British empire, was proud to send soldiers to the trenches. The questions of what they got in return for that pride and what they lost are still live in Newfoundland. You could say that what they got was ridicule (the “Newfie” joke is the “Paddy Irishman” joke of Canada) and what they lost – you have only to look to sea to remember it – was the cod.

We ate all the cod, or nearly all of them. Vast shoals of fish, five feet long. Cod as big as a grown child. From the 1620s on, the Portuguese, the English, the “Spainyards” as one man calls them, with their factory ships, the Japanese and, yes, also the Newfoundlanders themselves hauled them out of the ocean. But if you look at the sweet-seeming villages of small wooden houses that cluster along the shore, it is clear that, whoever made all the money, it wasn’t the men who risked their lives on the high seas. In 1992, a moratorium was called on cod fishing and those modest wooden houses started to empty and fall – in a way that is almost picturesque – back into the water.

Many of these redundant fishermen had names like Doyle, or Walsh, or Ryan – some of them descendants of men who worked the Grand Bank, centuries before. When boats set out from the West Country of England, they stopped along the south coast of Ireland to take on extra crew – and some of these Irishmen jumped ship on the other side, and stayed.

‘It looks like Canada to me’So you can’t call them “Newfies”, and you can’t call them Canadians, but they will let you call them Irish – unless their ancestors came from Devon, but those ones are easy to spot because they talk like people from Devon. The Irish talk like they came from Dungarvan. Their accents were preserved by the salt Atlantic air, in tiny isolated communities along the shore. It was a long time before they got roads.

These days, the highway is long and the traffic serene: everyone drives like a lady or like a Canadian. “It looks like Canada to me,” I said to one dissenter and pointed out a hillside of pine trees that was only a Mountie short of a postcard. “That’s not pine,” he said (he seemed a bit shocked). “There’s no pine over there. Those trees are spruce and fir.”

It may all look the same to an outsider, but as you travel through the vast beauty of the landscape, you begin to lose yourself in the fractal variation of one bay or inlet that is crucially different to the inlet or bay before it, and the names you pass are more a story than a map: Random Island, Come by Chance, Witless Bay.

Five hours from St John’s, a ferry leaves Farewell for the island of Fogo (which is not really Newfoundland, I am told) and a road leads through the villages of Seldom, Little Seldom and Joe Batts Arm, all the way to Tilting. And, of course, Tilting is not the same as any of these other villages, because Tilting is not a patchwork community of Irish and West Country English – Tilting is straight Irish. Tilting is Irish on the rocks.

The grave of Michael Greene
Winds rake the island of Fogo, icebergs float past in the early summer and whales blow. The first Irish settler, Thomas Burke, arrived here in 1752. The first known grave of an Irish emigrant is up on the hillside: Michael Greene from Carrick-on-Suir. The headstone gets all the spellings right and says he was buried in 1856. He has a magnificent view. There is a faded wreath and a prayer, written on a piece of paper and protected by a plastic bag, propped up against the stone. They were placed there in 2011 by a group from Carrick-on-Suir and the prayer ends with the words: “God bless Michael Greene and all who followed him.”

A few Irish politicians turned up when Tilting was declared a National Historic Site in 2003 and RTÉ did a documentary in 2011. There is a Féile Tilting each September, which last year was linked live to Youghal local radio. And it certainly is freakish and lovely to hear these clear and yearning accents of a people who, after centuries, still look over the Atlantic towards home.

Maureen Foley says that when people come back for the summer, “the church is blocked”. The last 10 years they said that Tilting was dying, but she had faith the community would survive – and true enough there are people now who commute to shift work in Alberta, there are others doing well in the oil industry in St John’s who have built new houses here.

Being Irish, she says, the people are very focused on education, and the children of the community often work as professionals, far afield. But “everyone here owns their house”, she says, so it makes sense to live here, or to keep a place, if you can. What is the permanent population of Tilting? That is hard to say. Maureen tries for 200 but another woman says 95. There are no young people to be seen.

The pain of emigration is repeated here, almost as a race memory, and the songs of sorrow and loss are put to new use for the generations gone since the fisheries closed. In Joe Batt’s Arm, Zita Cobb remembers the exact date she left the island for a new life in Ottawa. It was just before she turned 13. Cobb, who went on to make a fortune in fibre optics, came back to Fogo some years ago and started an island regeneration scheme, which is part international arts foundation and part internationally expensive hotel.

The hotel, just opened in June, is a remarkable postmodern building, one end propped up on stilts that are two stories high. It was built, in part, by Irish workers, who were imported, in a gang, all the way from Toronto, because there is a construction boom in St John’s.

Their names are on a map of Ireland pinned to the wall of Foley’s shed: men from Malin, Letterkenny, Westport, and Monaghan. They came here to socialise (that is what happens in Newfoundland “sheds”) and then they too left, leaving a brand new bodhrán, a dead email address, a charitable cheque for a sick child. They went back to Toronto or, some of them, home for a while to Ireland. One of them found a girlfriend in St John’s, and stayed.

The cod compromise
For two weeks in the summer and one week in the fall, the locals are allowed to catch five cod each per day and, down in the shed, Maureen’s husband, Phil, fries up a panful of fish tongues for the visitors. Later, Maureen sings You’re Sentimental Irish, Just Like Me and a neighbour does a nice version of The Galway Shawl. This woman says it was hard to find the real music in Ireland – by which she means songs sung in Irish – and that all she heard, when she went to Dublin, was the stuff you could get in the pubs of St John’s.

Ah, authenticity. It’s as rare these days as cod. Outside, the weather shifts as fast as Irish weather – only much bigger. In this part of the world, the storms can kill you, the wilderness can still swallow you, and it starts 10ft outside your door.

The people of Tilting, as elsewhere in remote parts of Canada, look out for each other in a constant and material way. The hospitality is astonishing, the values so communal they seem almost Scandinavian.

These people consider the best part of themselves to be Irish – who am I to suggest that it might actually be Canadian? Besides, this isn’t Canada. It isn’t even Newfoundland.